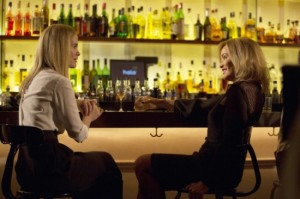 Deadly witches, voodoo queens, tranny butlers , zombies raising from the dead and a beasts’ head in a box, were the perfect combination for a Halloween night episode.  Last night’s episode, “Fearful Pranks Ensue,” showed us that Fiona may have killed Madison for nothing and another Supreme protégée is still out there.

The council comes down to pay a visit and question Fiona on the disappearance of Madison and her mentor Annalee. Led by council witch, Myrtle Snow, who believes she knows the truth about what happened.  Fiona lets her know that she is the HBIC or Head Bitch in Charge and that her silly accusations can’t stop her and her powers.

The voodoo priestess brought down the thunder for the death of her beast BFF. Calling up a spell for the zombies to come back from the dead like they did in 1961 and one suspicious hooded person to throw acid on Cordelia’s face.

I have so many questions!  I wonder what will happen with Madison? Will she come back from the dead? Will the voodoo priestess enchant up a resurrection spell and bring her back to life to reveal the truth? What about poor Kyle will he ever be put back together again and be normal? My spidey sense tells me no and that Zoe will eventually kill him with her powerful kitty cat. What about Cordelia’s husband Hank, is he the next bloody face? What the….

I love that the zombies came out from their graves in the end, it was so Walking Dead and right now I cannot get enough of those lovable, huggable zombies.

Let’s see what happens next week!