This week’s episode, “Marriage and Hunting,”brought back the return of the real Slim Shady, I mean the real Van Alden who had been posing as the meek, head in the sand Mueller. In order for his ties to grow stronger with Al Capone, he must prove to him that he can get kill off O’Banion. As Mueller approaches the daunting task, he starts to reveal himself as the sadistic, controlling freak he once was in Season One. The job is done for him instead by 3 men who enter the flower shop. They shoot O’Banion and Mueller walks over him and steals the money from the register like a boss.

Mueller goes home, throws a wad of money on the bed a la’ 2 Chainz and 50 Cent and asks his wife to take off her clothes. This is obviously a turn on for her because she has probably been waiting for years for this man to make a move on her and show her who’s in charge. Go Mueller!

Meanwhile, down at the old corral, Chalky White is caught in the cross hairs of fighting Dr. Narcisse and keeping his family appeased. On one hand he is the doting father who is taking care of his family and the other a man in love with the “Daughter” of his enemy. It’s a story for the ages like Romeo and Juliet, yet this Romeo will not go down without a fight and he is very willing and capable of showing Dr. Narcisse who is in charge. 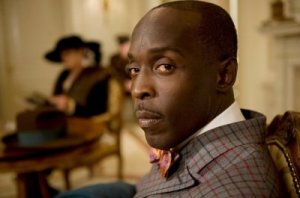 Chalky tells Nucky that last year he saved his life, but Nucky refuses to get involved with his business. Dr. Narcisse is a man comfortable in his own Libyan skin and believes in a forward thinking sense that he is an equal amongst the Nordics. Is he really smarter than everyone else or is he just comparing his aptitude against the junkies he has been supplying?

It’s funny how Nucky won’t take some heat for Chalky, but he was sure as hell willing to promise him anything last year when he was held up and his head was on the chopping block.

Just as Chalky has the heat coming down on him, Nucky knows he needs to watch his back. The feds are nearing and Eli is very close to making the wrong move. We are left with the image of Sally and her shotgun, an endearing moment overshadowed by the reality that both she and Nucky need to be careful with the ties they make in both business and life.