OMG, last night’s episode, “The Axeman Cometh”, was so good. The show introduced the Axe Man as the title suggests, played by Danny Huston, I love this actor from Magic City and Hitchcock to name a few. He plays the part of a deranged, yet classy killer so well.

The serial killer was killed in 1919 by the witch coven for not playing jazz music as he instructed, they lure him and stab him to death. I really liked that scene with the witches bearing black cloaks, stabbing him, it reminded me of the movie Birds and Psycho all in one.

Cordelia comes home after the acid incident with a new found power. Her eyesight is gone, but her sense to see the truth has been heightened. One electrifying touch and she can see who a person really is in fits of flashbacks. As she says, “it’s a bad cosmic joke.”

We find out that her husband Hank is a witch hunter! Ok, we knew something was off with this guy, but now we know he has been secretly killing off the coven under the orders of the voodoo priestess.

Zoe accidently conjures up the spirit of the Axe Man through her Ouija board and ends up making a deal with him. He will help her find Madison in exchange for his freedom from the underworld. The board points to the words “attic,” where Madison has been kept locked away by Spalding. The only way to get the truth from him is to use Nan to read his mind. A man living in a house full of witches all his life, of course he knew how to throw them off and keep Fiona’s secret safe. 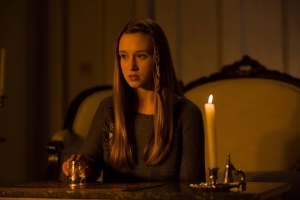 Meanwhile, in the swamps, Stevie Nicks, I mean Misty, tends to her soil and is working on bringing Myrtle back to life. I guess what you reap, is what you sow. Zoe enlists her help to bring Madison back using her Louisiana mud and some magic.

As they say in Clueless, “As if.” As if Madison could just be kept in that wooden box, dead forever! She comes back to life, asks for a cigarette and has no recollection of how she died, all she saw was black. Is this a sign that bad little witches go to hell, where there is no bright light? 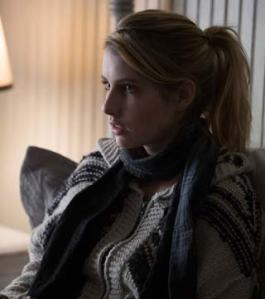 The Ax Man is set free and he walks into Fiona’s bar. The same place where it seems bad things happens and emanate from. Will Fiona be found out to be the murdering bitch witch that she is? Will she finally get a taste of her own medicine via the Ax Man? Look forward to finding out next week.