It just came to me that I have not blogged about the new Showtime series Masters of Sex. I have to say that so far, this is my favorite new show of the year. It doesn’t have walkers, bloodshed, gangsters, canned laughter or gratuitous sex, all the stuff I normally enjoy. Instead sex is portrayed in a different way, not as a means to an end, but as something to be viewed under a microscope or some stirrups.

The show is about the true story of how Dr. William Masters (Michael Sheen) and Virginia Johnson (Lizzie Caplan) conducted their infamous sex study and became the leading pioneers of sexual health and exploration. Dr. Masters is a fertility specialist at Washington University in St. Louis and Virginia, who is at first his secretary and then later progresses into the role of his research assistant.

The show touches on so many facets of life in the fifties and sixties. Think the era before the sexual revolution. For one, sex was something that no one talked about openly, if anything merely to copulate and create, but the idea of thinking about sex as pleasurable was almost seen as crude and salacious.

Dr. Masters, being the nerdy scientist that he is, wants to know how the body reacts to sex, what phases the body goes through before, during and after sex.

At this point in 2013, no one really has any question about what sex is and how it works, but at this time the idea that the body reacts on a physiological standpoint versus an emotional one is huge. For example, when the back arches or when someone scratches their partner in the heat of the moment, those are not acts of passion, but physiological moments that the body enacts on its own. Almost in a mind-numbing way. 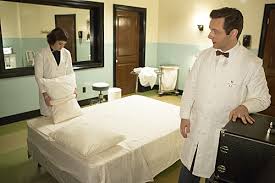 I always learn something when I watch this show, which for a nerd like me is awesome.

I think we look at that information today and do not think twice about it. We live in an age when sex can be seen on screen on an iPhone if one wishes. Seeing how it was treated in that era and how as a viewer I know it is going to change is interesting and captivating to watch.

The show also touches on the role of women in this time. We see how female doctors and scientists are treated and the lack of respect they are given. We see how the woman carries the burden of having a baby and how the idea of fertility is most always pinned on the woman’s uterus, and that unfolds in Dr. Master’s wife, Libby (Caitlan Fitzgerald) and his relationship with her.

Another issue that is touched upon is the idea of homosexuality. This is spectacularly shown through the eyes of provost Dr. Barton Scully (Beau Bridges) and his relationship with his wife Margaret (Allison Janney). The provost is not only a mentor to Bill, but someone who is secretly having homosexual affairs with young men on the side.

Margaret is a lonely woman, who has the accolades of being a provosts’ wife, but who lives in a world devoid of love and sex. In fact at one point we learn she has never had an orgasm. This sad state of affair is interesting and captivating to watch unfold. The relationships of our grandparents, at least for mine, have always seemed secretive and like they were hiding something big and Janney conveys that angst and feeling to the tee.

We also have the young doctor, Ethan Haas (Nicholas D’Agostso) who not only has an eye for Virginia, but we see his role as a man who has simply gone through life “floating” as he says in one episode. Just doing whatever comes along because it seems like the right thing to do.

The performances of all the actors thus far are phenomenal, Sheen conveys the coldness and sternness of a man devoid of any interest in his home life, yet is obsessed with the act of sex. Caplan asserts herself as a woman in control, with a fierce sexual bravado. The way she looks at the camera and Bill, it is understandable how she can be seen as seductive. 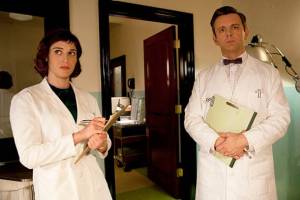 I can definitely see either of these and Janney coming up for a Golden Globe for their performances.

Fitzgerald as the wife, I believe gives a stand out performance as well. Every time I watch her, I feel for her, I sympathize and I want her to get off that couch and go do something about her lack of sex. We almost want her to leave Bill because she deserves so much more. Just like Betty Draper did in Mad Men, but she is much more likable on camera and we want to see her happy.

Good news for the fans out there, it just got picked up for a second season. Looking forward to see how the “work” as the scientists calls it unfolds and who will use the Ulysses next.

(had to put this too funny)