I saw The Purge recently and I have to say it was the worst movie of 2013. Ok, that is a really bold statement to make, but the movie did not have a clear storyline and nothing connected made sense to me. Everything that the characters would do, neither had repercussions, nor did they seem significant, it was to the point where I questioned everything they did because it just did not make sense or it seemed inconsequential to the story.

The movie is set in 2022, a time in the world where crime is at an absolute low. The way that the crime has been reduced is by holding a “purge” once a year, where people are allowed commit any crime they want without any repercussions for 12 hours, under the premise that the lowest of the low in society will be taken out and disseminated from the culture. 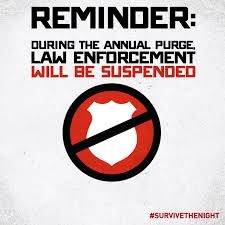 Sounds very Hunger Games-ish, the formal announcement and having the acts broadcasted around the world, the horrific idea of killing for the sake of a better world, a dystopian like environment. All of that reminded me of the Hunger Games and the idea of the survival of the fittest.

The movie stars Ethan Hawke as James Sandin, the father who sells equipment to protect homes on the day of the purge. Now I really used to love his movies in the 90’s, I think I watched Reality Bites about a hundred times on VHS, so I have a soft spot for him and was excited initially to see him in this flick. He is seen as successful, as the family lives in the biggest house on the block.

In the house is Mary his wife, played by Lena Headey, again I was eager to see her step out of her Game of Thrones role into something different and their kids Charlie (Max Burkholder) and Zoey (Adelaide Kane).

They seemingly appear like a normal family, who after the purge begins sit down to relax and let the night go by unscathed. Little do they know that the worst is to come. Madness ensues and this is when the movie starts to go literally all over the place.

The movie started off with a clear direction, the night of the purge and how it involves the Sandin family, every time something happens it never connects to anything else. This leaves the viewer confused and disconnected.

Overall, I think this is a fun movie to watch if you just want to make fun of everything that happens, a good laugh, but if you are looking to be scared and want to jump out of your seat, then this is not the film for you.

5 Reasons You Should Not See This Movie:

1. There is no character building in the story. Half the time, the viewer is unaware of who the people in the film are and why they are even shown.

2. Those ugly girls in those freaky masks. Enough said.

3. Not that every movie needs to be plausible, but a lot of the things that occur in this film are laughable at best. For example, how many people survive getting shot at and stabbed and walk away unscathed, very few to say the least.

4. There wasn’t a character that I clung to or that I cared what happened to them. I need to feel connected in order to care about their livelihood.

5. The camera moves around a lot, especially when it comes to the viewpoint of the little boy’s weird doll head camera. Sometimes giving us too much information, instead of more suspenseful angles.