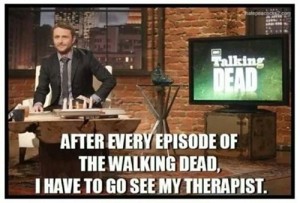 The season finale, “A,” what all TWD fans have been waiting for finally came this past Sunday. The episode was watched by over 15.7 Million viewers, needless to say everyone was anticipating what was going to happen and I think it is awesome that a show like this can garner so many viewers.

The show started with a flashback to when Herschel and Rick were at the prison and this scene gets inserted a few times throughout the show. The talks revolve around Herschel telling Rick to teach his son to farm, to hold back from going out to search for supplies and to stay and enjoy quality time with Karl. In the usual wisdom of Herschel he teells him that if he teaches his son to farm, then one day Karl can teach his son as well. In this type of society, the opportunities for fathers to teach their sons valuable lessons has been destroyed.

Although I believe that Rick has taught Karl other lessons about survival, that have nothing to do with being a child, like how to shoot a weapon, kill a person or walker and how to be tough even when you are on the brink of having an emotional breakdown.

Upon walking down the road, they stop for the night to rest and then Daryl’s team of marauders show up and find them, but Daryl himself is nowhere to be found. If you remember from last week, the leader of the gang said he was about to find Rick, the man who strangled his friend.

This is when everything starts to crazy, all the guys point guns at Rick, Michonne and one of them grabs Karl and threatens to kill him. Then Daryl shows up and tells them that they are good people, but they don’t believe him and they literally kick the living daylights out of Daryl. WHAT?!

Rick’s survival instincts kick in and he bites the leader on his neck, yes just like Bill Compton, he bites him in the jugular and kills him. Michonne manages to kill her attacker and Daryl does the same and eventually the pack of crazy people are dead.

Daryl is back with his OG group and now they are a true force to be recockend with, although Rick is a bit shell shocked over everything that happened. As is Karl, who just wants to stay as far away from him as possible.

Off they go to Terminus, this group is the first that sounded apprehensivev about going. They load up the guns from the bad guys and throughout the epsidoe Michonne keeeps on mentioning all the bad camps she has run into along the way. Foreshadowing much?

They finally get to Terminus and they peak through the fence and jump over to check it out. They hide their extra guns in a hole and basically that was a way of telling us I am sure that they will go back for them!

Inside Terminus it seems at first pretty quiet and upon entering a warehouse they see everyone painting posters for Terminus. Is it just me or does this place look like the prison set just painted differently?

Everyone seems friendly and nice and they put their weapons down and expalin who they are and that Terminus is a safe place of refuge. Hmmm, who said that last time? Oh yeah the GOVERNER! 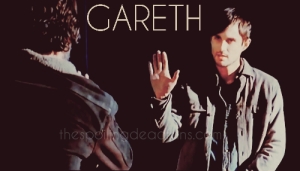 They kindly hand back their weapons and even graciously give Michonne her sword back. They tell them that they will fix them a plate and the creepy lady outside is grillin up some goodies. All of a sudden Rick notices something different, one of the guys has Glenn’s pocket watch.

Another has Daryl and Maggie’s poncho! OMG the freaking poncho, everyone wants that hot item, I hear it is the biggest trend in zombie apocolypse gear. 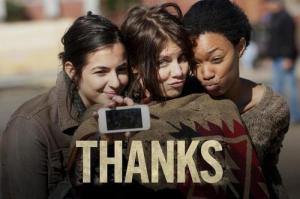 This is when everything goes out of control, shots are fired, yet they miss every single time. As they are running through Terminus, we see a room filled with candles. Ok this is weird. Then a room full of what appears to be animal carcasses. Ok that is really weird too. 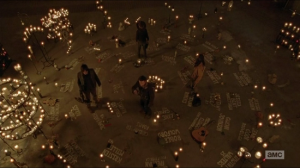 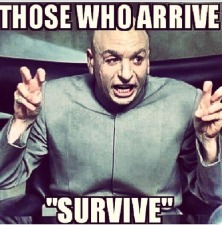 But they keep running past all of this and finally have to surrender because they threaten them with killing Karl. They aim directly at him and then tell everyone to get into a storage container.

What?? Yes get into the storage container he tells them. When they step in they see a carton for powdered milk. Once inside, guess what… SPOILER alert… the gang is inside. Reunited and it feels so good.

So we know that Carol and Tyreese are most likely on their way. Hopefully they see that Terminus is not what it is and we will find out what the hell is reaally going on in there.

I think that these peeople are cannibals who lure people to Terminus to eat them. Mabye they are a cult and they sacrifice people in order to save themselves and the world. Was the powdered milk a sign that they are feeding them to fatten them and eat them? What do you guys think? 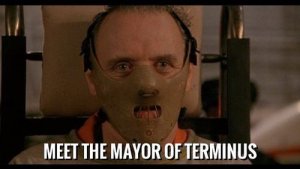 I thought the finale was good and it finally picked up. Honestly this could have happened 3 episodes ago! I am alone in this? I hope that next season gets better and we start to see the fun loving action of killing zombies and people, that we viewers have grown to love. I also hope that we find out where Beth is and that she is ok, because Bethyl totally needs to happen and those Terminus jerks need to die. 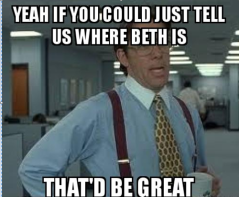 Peace out Walking Dead, see you back in October 2014!