I will admit it; I watch a lot of television. I just got a Roku, so now I have the ability to watch even more shows. Yes, I have a problem I need an intervention. But when I get home from work and the gym all I want to do is rest and watch TV. YAY! I also tend to catch up with other things while I am watching, like email, cleaning up, Twitter and of course my favorite thing in the world Pinterest. All of this keeps me on the pulse of the TV world.

I figured since I originally wanted to do more TV reviews on here, I can give you guys maybe my monthly TV favorites. I am totally stealing this from all the YouTubers out there who do this type of post.

1. The Following: Season 2
This is most definitely my favorite show right now. Joe Carroll is busy creating a new cult and of course trying to destroy Ryan Hardy in the process. Kevin Bacon and James Purefoy are awesome in this and seriously my fave match, they play off each other so well.

2. The Americans: Season 2
I really dig this show it’s about Russian spies living in the US in the 80’s. Keri Russell and Matthew Rhys make a dynamic team. They live next door to FBI agent, who is secretly having an affair with a Russian and he doesn’t know that he lives next to spies. They always have some secret task that they are up to and it is fun to watch it play out. Plus the Russians are always super sexy!

3. Workaholics and Broad City
Both of these shows are on Comedy Central and basically they are very similar except one is focused on dudes and the other girls. Both are young 20-somethings who are raunchy, rude and crude and facing the issues of getting real jobs, sex and having fun with friends. I absolutely am addicted and I look forward to these shows every week. Adam DeVine is my absolute fave! If you like shows that use the lewdest, crudest words out there then you should watch this, they really push the envelope. 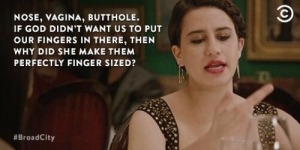 4. Lindsay
Yes, Lindsay Lohan now has her own reality TV show on the Oprah network OWN and I have to admit I am obsessed. I have always liked the Lohan, not sure why I just do. There’s something captivating about watching her face all her challenges from trying to stay sober to just waking up in the morning. Seriously this girl doesn’t get up till like 2pm everyday. I guess it is interesting to watch because usually we just see the demise of Hollywood stars and we never see the part where they try to pick themselves up and start again.

5. Bates Motel: Season 2
I am a big Hitchcock fan and I love the movie Psycho, so I just love this show. I have to say the best thing about this show are the actors. Freddie Highmore plays Norman Bates and Vera Farmiga plays his mother, Norma Bates. Together these two are an odd pair, she is a doting, loving, almost smothering mother and he, the son who will do anything to protect her. The bond they share is sweet, yet very twisted and weird. My favorite scene this season so far is when the two of them sang, “Mr. Sandman,” it was creepy, weird and just odd.