This week’s episode, “A Days Work,” focused around the holiday of Valentine’s day. Mad Men has done this in the past with Christmas and Thanksgiving and the like, I love that they intertwine a simple holiday into a storyline that is rich, complex and deeper than what it appears on the outside. Also, it is just one of those days at the office where every fire that can erupt does and putting it out is always a pain in the backside. Everyone has them, even the folks down at SC&P.

Now that we are almost entering the 70’s on the show, we are seeing a real shift as to what is happening in the work movement. Not only are women at this time starting to take on more demanding positions and roles, but African-Americans as well. Here with these two storylines we see the push and pull that is occurring, despite the changing landscapes in offices, there are still people who are set in their old ways and find both unsettling in prominent roles or positions as the face of the company. This changing dynamic and friction that is occurring between the new and old, is the underlying current of the entire episode itself.

Let’s do a quick and dirty little recap about what happened in this episode. Sit down and pour yourself a whiskey and make it neat.

Peggy comes into the office, miffed and already feeling upset about the fact that it is Valentine’s day. Her bitterness subsides when she sees a bouquet of roses on Shirley, her assistant’s desk. She squeals with excitement and realizes there is no card attached and assumes they must be from Ted. Quickly she calls the Los Angeles office and leaves a cryptic message with his secretary, something along the lines of, “Peggy just lost an account.” Nudge, nudge, get it?

Awkwardness resumes when Shirley tries to tell her those are really her flowers from her fiancé. Instead she says nothing and walks away perturbed. She vents to Dawn, who tells her it’s not worth and to say nothing. Here we see the old dynamic that African-Americans faced in the workforce, living under the old adage of it is better to be seen and not heard, in other words just keep your mouth shut and hope not to get fired for making your presence known.

We also see Dawn going to Don’s apartment, tot only is relaying him his personal messages, she is also giving him insider info as to what is going on in the office. Her loyalty to Don surmounts her feelings of betrayal, when she gives him account information.

Across town we finally get to see Sally. She gets invited to her roommates mother’s funeral in the city and obliges to go with her friends simply so they can get out and maybe do some shopping. I have to say she has become one of my favorite characters. She breathes life into the feelings that young kids in the 50’s and 60’s had to face. They lived in an era without cell phones and without being babied, see back to old episodes when Betty Draper treated her like a real beast of a mother. It always makes me think of how my parent’s grew up when I see her. There was no hand holding and kids fought their way through life differently, the actress Kiernan Shipka, portrays this character so well and she will be a force to be reckoned with when she gets older.

Upon coming back after the funeral, Sally realizes she left her bag at a store. Being the independent, brave kid that she is, she decides to get off and go look for it alone and tells her friends she’ll see them later. She has no luck in finding her purse, so she pops into her dad’s office to get some train money. Umm… yeah… about that… she soon realizes from Lou Avery that he is not there and nowhere to be found. She goes back to her dad’s place and lies to Dawn about the fact that she went to his work. She is used to her dad hiding secrets and she knows something is not right here.

Don had been at lunch with Dave Wooster, his friend from a rival agency. Together they laugh and drink, yes Don is still drinking. I thought he was cutting back or going sober? I guess old habits die hard. Here, we are getting a real glimpse at the struggle he is facing, on the outside, he wants to be the Don Draper he is known to be, but the siren cry of the bottle is difficult to resist.

Back at the office, Lou Avery is angry that Dawn wasn’t there to wave off Sally. He calls in Joan and Dawn to yell at them about the incident, to which Dawn does not back down and tells him, she would have been there had she not been out buying his wife a V-Day present. Wow, her tenacity really shown through and it must have taken a lot from her, considering earlier she told Shirley not to make waves. He tells Joan to move her to another department ASAP.

Peggy then attempts to give Shirley the flowers and then takes them back to throw in the trash. Shirley tells her the truth that they were hers and Peggy responds by telling her she is immature. What a royal B! Peggy tells Joan to move Shirley too. Oh boy it is one of those days!

Joan puts Dawn out front at reception and as Bert Cooper is leaving the office he sees this new changing of the guard. He goes back and tells Joan, discreetly yet in a very racist way, to “rearrange her rearrangement,” and move her somewhere else out of sight. Here the undercurrent of racism can still be felt and it is obvious that the mentality still exists for many people at this time.

Jim Cutler walks in to Joan’s office in the middle of the drama and suggest she take a different office, perhaps upstairs with the account men. Jim is progressive and we see this nuanced detail throughout the episode. He believes in her and knows she could do it just as well as the men. She tells him in order to find a replacement she needs someone who doesn’t care about making friends or pissing people off. She packs up her office and decides to take the offer.

In doing so, she pulls Dawn in to replace her. Dawn’s earlier standoff with Lou, showed her that she has the courage and force that an office manager would need. 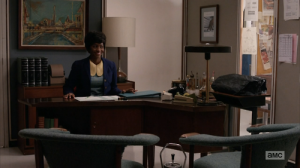 Now Dawn is seen slipping into a bigger role and we see the shift back to a more optimistic future. Did someone say Beyoncé? What?!

The show ends with Don taking Sally back to school. On the way, they get food at a diner and he tells her everything, the truth that is going on with him. Sally feels better about this and her mood changes. He even suggest doing the old dine and dash as a way to bond with her. When he drops her off at school she tells him, “I love you,” and he looks almost shocked to hear this display of love from her.

On that note I will leave you with another funny Jon Hamm pic, here is reading a Twitter post about himself. LOL!

(I will never hate you Jon!)