This week’s episode, “Oathkeeper,” finally revealed to us the answer concerning the biggest mystery in Westeros thus far, who killed Joffrey Baratheon? Thank you to my girls out there Sati, Anna and Abbi, who helped calm me down and assured me I would soon find out who killed him. Again, this week Game of Thrones never disappoints and I know everything that happened this week is going to lead into something even bigger that is going to occur, what it is, I don’t know, but that is the fun part of watching this show. And for those who read the books I am sure it is still just as exciting to watch it all play out.

Ok, let’s get started and chat about what we watched.

First off, let’s get the juicy bits out of the way. Sansa is shown on the ship with Littlefinger and he basically admits to her that he orchestrated the killing of Joffrey. The necklace that Dontos had given her to wear at the wedding contained poison in one of the stones. When I was watching the wedding scene, I wondered why Lady Olenna Tyrell had adjusted Sansa’s necklace, we must remember when watching this show every scene matters and has meaning. It turns out she took the poisoned jewel at that point and slipped it into Joffrey’s drink. Oh my goodness, this woman is awesome and has balls of steel, who woulda thought?!

Next, we see her talking with Margaery and giving her sage advice. She tells her, again admitting to some nefarious plot, that she would never have let her grand-daughter marry such an evil man. Lady Tyrell proceeds to talk about how back in the day she had mad game and could pull any King or Prince out there.

She puts the bug in her ear to start cozying up to Tommen and seduce the boy, she wants her to do this before Cersei starts manipulating her son against her. What a smart move! What teenage boy (although I think he is supposed to be a child in the books) can resist such temptations of a beautiful woman.

Does Margaery listen to her granny? Of course, duh. She goes in at night and tells Tommen that since they will be wed one day, they should get to know each other, but this must be their little secret. Tommen is almost frightened at first and his innocence and naiveté comes through, Margaery settles his nerves by changing the convo to his cat and gives him a kiss on the forehead.

Jaime meets with Tyrion, despite his sister’s disapproval of the gesture and reasons that he is an innocent man. Cersei doesn’t care what Jamie thinks and wants him killed and wants Sansa’s head on a spike. Jamie tells Brienne to protect Sansa, just like she had promised to Catelyn before and we all know Brienne loves a good mission. He gives her his Valyrian steel sword and black armor, I think Brienne at this point nearly peed her pants with excitement. She goes on to name the sword, just like everyone else has, every good sword deserves a name and she calls it Oathkeeper. I bet a lot of people are hoping that one day this odd pair will hook up, or is that just me?

He also sends Podrick to go with her to help out and gives him Tyrion’s ax as a gift as well. Are we starting to realize that Jamie has a heart? I am not sure because last week he did sorta rape his sister while his dead son watched over them, so who knows.

Now what is the Khaleesi up to in Meereen? She sends in her men to further convince the slaves to create an uprising and kill their masters. Oh yes, just another usual day for her. She mounts up the slaves on crosses just like the slave children who were killed. Point being, her army is growing stronger by the day.

(And you thought you were cool, mmhmm)

Up at Castle Black in the North, Alliser is realizing that he must not be such an ass to Jon Snow because he is so well liked and this could prove disparaging for him. He allows Jon to lead an expedition to go find the Night’s Watch rebels who are at Craster’s Keep. There is a newbie in town, Locke (the guy who chopped off Jamie’s hand), yes that dude was sent by Roose Bolton (the guy who killed the Starks at the Red Wedding..jerk) to go capture Bran and basically any Stark that is alive as a hostage. Uh oh, this guy is a real trickster and Jon is slowly falling for it.

Meanwhile Bran, Hodor and the Reed kids are outside Craster’s Keep as well and get caught by Karl Tanner, a real mean dude who drinks out of skulls and rapes women. Jojen Reed suddenly has a seizure and Bran ends up having to admit the truth about who he is, all this is very unsettling. 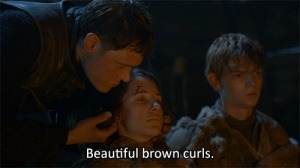 At Craster’s Keep there is one baby left and the women there chant over and over again that he should be given as a gift to the Gods. They oblige and take him to the woods where he is quickly captured by a White Walker. He is put in the middle of them, offered up like a sacrifice and they pick him up and turn him into a White Walker. Ummm… talk about creepy.

So far so good, everything is moving along great, what did you guys think of this episode?

(LOL I make myself laugh sometimes)

14 thoughts on “Game of Thrones Recap: Season 4, Episode 4: The Mysteries of Westeros”