The Fault In Our Stars
Directed by Josh Boone
Written by Scott Neustadter and Michael H. Weber

Everyone thinks love is easy. Everyone thinks they deserve love. It’s what we hear about in fairy tales. The man of our dreams comes by, saves us from distress and then we look into each other’s eyes and live happily ever after. That’s how love is supposed to occur, right? At least that is what movies like Sleepless in Seattle, Say Anything and Dirty Dancing taught me.

What happens when you take the romantic notion of love and mix it with teenagers who have cancer? Love knows no boundaries and sees no disease, but if you were dying would you want to fall in love? Knowing that both people’s feelings would be at risk because you know you will be gone far too soon, would you still dive in? Is it fair to the other person and is it fair to you to hold onto something that will never turn into an everlasting, love story that ends in marriage and babies? In the movie The Fault in Our Stars, all of these questions and logic are put aside when two teenagers with cancer meet at a support group and fall in love.

The film, adapted by the John Green novel of the same name, takes a different look at love by giving viewers a type of story that is very familiar, yet completely unlike anything we have ever seen. Hollywood produces every type of movie out there, but movies just about cancer are a rarity. Yes, there are movies with the subtext of cancer, like in the film Beaches, yet it is not about cancer as much as it is about friendship. The Fault in Our Stars mixes two main themes, cancer being both fully up front and present and love. During the love scenes though, the story of cancer always lingers as an omnipresent character itself.

(John Green with his Fault kids)

The movie is about Hazel Grace Lancaster (Shailene Woodley) who has had cancer ever since she was a small child and now as an adolescent, she still suffers from it, but she has learned to manage and live with it. For her it is part of her life, she carries around her oxygen take with just as much normalcy as her iPhone. On the outside she seems like any typical teenager, she talks back to her parents at times, checks her phone a lot, but unlike other teens she has to stay home more often than not due to her condition and her interactions with friends is limited. 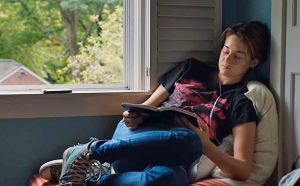 Seeing that she is cooped up in her house, her mother, Frannie (Laura Dern) pushes her to go to cancer support groups, so she can get out and talk to more people her age. The support group is boring and lame and she just looks around at the other kids like whatever, just biding her time to get out of there. One day Isaac (Nat Wolff) brings along his friend Augustus (Ansel Elgort) to the group to share his story, since he is a survivor of cancer himself. He lost his leg to cancer, but he never lets it bring him down, in a sense he is a breath of fresh air in a room full of depressing stories. All Gus can do the whole time is stare at Hazel with a sheepish, flirtatious grin. Every time he looks at her she cannot help, but smile back. What teenage girl wouldn’t? 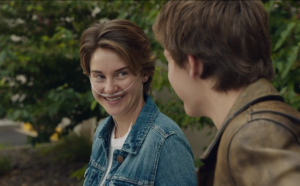 After their group session, he goes outside, they exchange phone numbers and they hang out together from there on forward. Check the box for normal teenage behavior right there. Hazel has an obsession with a book about cancer called An Imperial Affliction by Van Houten (Willem Dafoe). This book moves her so much because it deals with cancer in a different way and she persuades Gus to read it and together they discuss the ins and outs and their disappointment with the ending.

The two talk to each other a lot through text messages and phone convos and they hang out in his basement room, which for any teenager is the coolest thing ever. Hazel’s parents are surprised, yet worried about her relationship and they do try to warn Gus that she is sick and to not get his hopes up with her. This never dissuades him from falling in love with her. His willingness to fall in love with her is tender and sweet and would make any girl swoon.

Gus uses his wish from a pseudo Make-a-Wish Foundation to send Hazel to Amsterdam to meet the author Van Houten and to talk about him about the ending of the book. The books ends mid-sentence and they never know what happened to the character of Anna. Hazel is obsessed with knowing this, so that fact that she gets to meet the author sends her over the moon with happiness. Every time she looks in Gus’ eyes, she feels so much love for him, yet the fact that she has cancer is always in the corner of her mind.

In Amsterdam, they have a wonderful, beautiful journey where they almost act like adults on their own. They go to a fancy dinner out and drink bubbly champagne and act as if they had no cares in the world. There love develops and becomes even stronger on the trip, one of my favorite scenes is when they visit the Anne Frank house. It was as if in the house, Anne was narrating and telling the story of Hazel’s own life. Both Anne and Hazel lived with tragedies in their lives, but despite the difficulties they faced, they both just want to be normal, teenage girls.

Hazel’s mother is there with them, but she lets them be alone and enjoy themselves. She knows Hazel may never again have a moment like this in her life and she lets her go, she trusts that she will be okay with Gus by her side. That act of relinquishing and letting go and trusting her sick child is heartfelt and shows that her mother has put aside all her life goals in order to help her be happy.

The rest of the movie is their love story, the ups and downs and the rollercoaster ride that is teenage life and falling in love for the first time.

I understood fully going into this that this is a teenage, young adult story, so it does have its moments of cheesiness, but those can be overlooked because the quality of the story stands alone. What stood out to me was that Hazel and Gus, never let their conditions take the best years of their lives away. As the saying goes, they stood up to cancer, looked it in the face and kept on living.

Woodley in this role stood out; she didn’t play the character to be pitied, nor to be martyred. She seemed like the average teenage girl who gets butterflies in her stomach when her crush texts her, she feels shy when he brings her flowers, dealing with love as a teenager is fun and confusing and she portrayed those sentiments flawlessly. She is and will be, mark my words her generations’ Meg Ryan. Not because she has short hair like her in this movie, but because she encapsulates and is able to express love almost effortlessly.

Elgort didn’t come across as your typical teenage heartthrob either like Robert Pattison did in the Twilight movies; instead he seemed normal and quirky. On the outside, he was confident and behind closed doors he showed his vulnerable side and I think Elgort was able to nail that duality down.

Wolff did a great job as well, he was able to portray the anger he felt as being a teenage guy, dealing with break ups and the sort and he also brought a sense of humor to the film. He continues to become one of my favorite young actors out there right now. Even when he is on screen for just a short amount of time, he is magnetic and I want to see more of him.

Dern deserves some type of nod for her work in this film. She played the character of the mother with such warmth and depth and brought her forward to a new generation of people who have probably never seen any of her movies. I have to say that the majority of the time I cried, it was because of her, she inspired emotion and you could feel how strong her love was for her child. She wanted her to have a normal life so badly that it hurt and her acceptance of her daughter’s fate just made me cry even more. 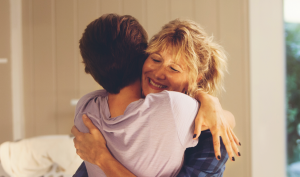 This movie came for me at a time when a few days before my family had rehashed a tragedy that happened with my cousin, who was 18 years old when he was taken from us. I couldn’t help, but think of him and everything he has missed out on in life. My mother also works at Children’s Hospital, so I have grown up with her experiences working there all of my life. After seeing kids and teenagers pass away, my mom has always told me not to sweat the small stuff and to remember that my worries are minuscule with what other people are facing out there. When I thought about all of these different things and in watching this movie, all I could do was become a big emotional wreck.

The probies have even made me part of the Crybaby Club. In no way shape or form am I even allowed to enter into the StoneColdBitches clubhouse. Yes, horror movies scare me, sad movies make me cry; don’t even get me started on We Bought a Zoo. It made me cry so much and I can’t believe I just admitted that. But I love watching these types of movies, so it is no wonder I enjoyed this film.

Overall, it was a pretty good film and it was fun to watch and cry along with it. It sort of has that tenderness of a John Hughes movie mixed with a romantic comedy of the nineties.  If you haven’t checked it out already, please do. If you are sensitive person or a teenager at heart than you may totally dig this movie like I did.

I’ll leave you all with an ode to TFIOS.