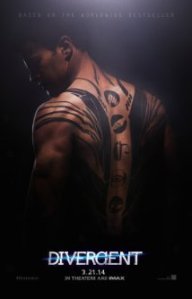 Stories about dystopian societies and the teenagers who inhabit them are all the rage right now. Vampires had their day in the sun, no pun intended, and are long gone from the minds of young adults, the tides have turned and the focus has been put on imagined futuristic societies on the edge of despair. Divergent gives audiences a movie that can be easily compared to The Hunger Games series and features strong willed teenage girls and boys who are trying to find their place in society.

In a post-war Chicago, the society has been divided into five factions based on virtues. The amity are basically the farmers and hippy-like people, candors are based on truth and run the judicial system, the erudite on intelligence and learning, the abnegation are the selfless helpers of the world and the dauntless are the protectors and soldiers. Each one dresses different and is based on specific colors like the erudite wear blue suits and dauntless wear leather jackets and pants.

Now the teenagers in this society, when they reach a certain age, can decide to stay in the group they were born in or choose a new faction. The catch is that once the choice has been made it cannot be undone and the ties to their previous faction and family must be broken.

The story is about Beatrice or Tris (Shailene Woodley), a former abnegator, who chooses to leave her faction and go with the dauntless. Her brother (Ansel Englort) chooses to leave as well and goes to erudite. Their parents  Natalie (Ashley Judd) and Peter (Tony Goldwyn) are heartbroken and distraught that both their children left. 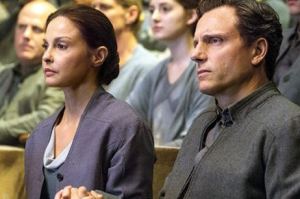 Was their life so boring that they had to leave their faction? Had their parents done something wrong in raising them? These questions are brought up by the erudite leader, Jeanine (Kate Winslet), a cold, heartless woman who does not want anyone to assert any human emotions or will in this society.

The movie takes us through Tris’ journey through dauntless and her relationship with her mentor Four (Theo James). Through her training she realizes that there is a group of people called divergents who cannot be put into any one category, they carry traits from all factions. These people cannot be controlled and pushed around as they have more control over their free will than others. Tris realizes that she is a divergent and this knowledge makes her even more powerful. She sets out to uncover the truth about why the divergents are being destroyed.

Parts of the movie were entertaining to watch. At the dauntless training camp, Tris learns to fight and throw knives and jump out of trains. I would have liked to have seen more of the other factions and what life is like for them. Also, more background on what happened before Chicago turned into this crazy society.

Honestly for me, this movie was sub-par at best. I felt that the whole story was a rip off of classic novels; it reminded me of Aldous Huxley’s Brave New World and George Orwell’s 1984. Of course I am not against stories being inspired by classic literature, but I do not like the fact that it seems like the same story, but with a different name. In Brave New World each person is born into a different role in society, they are Alpha, Beta, Gamma, Delta, or Epsilon and some are meant to be leaders and others are worker bees. Does that sound familiar? In 1984, there is an omniscient leader of Big Brother who watches everyone and the Party who controls them, cue Jeanine and her walls that see out into the world.

Woodley is charming as always and is shaping up to be as I have said it before her generation’s Meg Ryan. She is the current reigning queen bee of young adult love stories and her ability to quickly shed a tear and convey emotion was ever present in this film. She carried the film and without her, this film would have been more of a disaster.

James was uber-sexy, yet very dull as Four. I thought he did an okay job, but I felt that he could have stood out a little more. An actor who surprised me in the film was Jai Courtney who played Eric, the main, devilish Dauntless trainer. He played the character with arrogance and swagger and he brought a little grit to the film that was much needed. 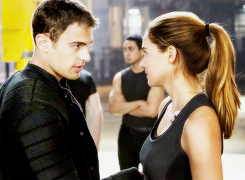 In the end I just kept wishing Katniss Everdeen would come in and swoop these little dauntless brats up and show them who is boss. To say that I prefer The Hunger Games franchise is a light way of saying hell yes!

If you haven’t seen this, I would say it is worth watching if you have nothing else to watch or you want to keep young teens or kids entertained. I put this movie on for my friend’s 11 year old son and he loved it. Overall, this was an okay movie, nothing to rave about, but entertaining enough to watch.

Here are some silly Divergent pics just for fun! I couldn’t help myself! 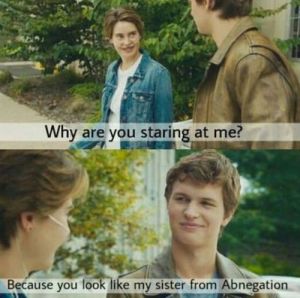 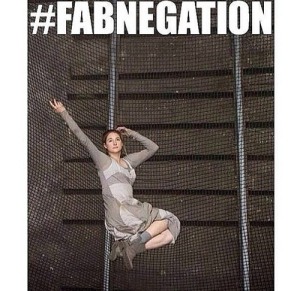