What To Watch This Fall TV Season

If you are like me, then you go through TV shows like worn out old tennis shoes. They need replacing every few months because seriously you wear them to death. That is pretty much me in a nutshell when it comes to watching TV. As soon as I finish a few shows, I need new ones to take their spot. I am always on the hunt for the latest and greatest,  yet I like to keep my faves in my back pocket. I know I can always go back to those and they will deliver a good watch. Lots of new shows premiered this fall season and if you need help trying to figure out what to watch, then I hope my guide will help you pick something that is worth your time. A lot of these have already started, but you can find many of them by going to the network’s site where you can still watch them.

Gotham: Season 1 (Fox)
If you are a fan of the DC Comics franchise and all the characters and super villains, then this one is just for you. The show is primarily about Detective James Gordon (Ben McKenzie) and a young Bruce Wayne aka Batman before he became the superhero that we all know and love. It also gives us the origin stories of such villains as the Penguin, Catwoman, Riddler, Joker, Poison Ivy and more. At the moment Penguin’s back story is one of the main highlighted stories, so just keep that in your back pocket.

As the title states it is primarily about the ins and outs of Gotham city and all the horrible things that are going on deep inside the city. One thing I really enjoy is that it has a comic book like feel to it, which is another reason why this show works. When one of the villains ties a weather balloon to a political figure, we see them go up in the air with a balloon, this really looked like it was taken straight from the comics. I am sure this will turn into a cult favorite and will have a strong presence at next year’s San Diego Comic Con.

Homeland: Season 4 (Showtime)
This show will only apply if you have seen the past seasons obviously, but this season is phenomenal. For me, Season 3 was decent, not great and there was something huge that happened in that season that in a sense looking back, it was actually a good move for the show. In Season 4, CIA agent Carrie Mathison (Claire Danes) is now working in Afghanistan as the station chief.  She sends drone strikes into an area where a Taliban leader was supposed to be living, meanwhile a wedding was taking place, this was not known to her and many civilians ended up getting killed. One family member who survived , the young college student Aayan Ibrahim (Suraj Sharma) posted the video on YouTube and from there all hell breaks loose. Another agent is killed and this sends everyone into upheaval, what goes on from here is fascinating.

For one I love that there are so many  new characters and actors on the show, one of my faves Corey Stoll is on this season and Sharma is a great addition as well. I also like how the story ties into what is going on right now in the Middle East and with our nation that is obsessed with social media. If you have some time, binge watch the first 3 seasons so you can catch up on this one, trust me you will not be disappointed.

Marry Me: Season 1  (NBC)
Are you looking for a new sitcom to watch? One that isn’t beyond corny and just plain awful. If so, then give Marry Me a chance, it stars Casey Wilson, who is one of my fave actresses from my beloved cancelled show Happy Endings and Ken Marino, who is just plain funny. He tends to play douche bag type of guys like he did in Party Down, Wanderlust, etc, but in this show he is totally not that type of guy. Together they are a newly engaged couple and are dealing with all the issues that come with a soon to be marriage, like moving in together, their families and friends and overall relationship stuff. The two of them together are funny and overall just silly and sweet. If you are in need of something to fill in the gap for your How I Met Your Mother withdrawal pangs, then this just might be the show. 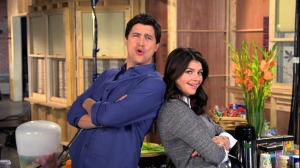 The Goldbergs: Season 2 (ABC)
If you read my blog, then you know what a huge fan of The Goldbergs I am! Like our fabulous T9M, I also love anything and everything 80’s. I grew up in that time period, I was a little kid, so a lot of what is featured on the show is a very distant memory for me, but nonetheless I was there and I have the awful hideous childhood pics to prove it. If you want a family sitcom that is just plain funny, then The Goldbergs will not disappoint. I love this show because nothing is ever perfect, the dad Murray walks around in his underwear when he gets home and he calls the kids morons and the mother is like a typical overbearing momma bear who just loves her kids and still treats them like babies. Overall, a great show if you are in the mood for some laughs and nostalgic moments.

American Horror Story: Freak Show (FX)
I am a huge AHS and Ryan Murphy fan. Only he can do campy humor and drama in one show and make it work perfectly. The Freak Show season has been running for a few weeks now and it is awesome!! So far this is turning out to be my one of favorite seasons. I am literally freaked out and slightly grossed out with every episode. If you are interested in watching the past seasons, you could check those out and watch them in whatever order you like, since they are not connected to one another. I believe you can catch them on Netflix. For a quick recap of the past seasons in case your curious, the first one gave us a haunting tale of murder and mystery all within the confines of a family’s home, season 2 gave us serial killers mixed with a frightening look at insane asylum life, and season 3 brought us on a journey to New Orleans and a look into the secret world of sorcery and bitchcraft, I mean witchcraft. With season 4, he is taking us into a realm that inspires a lot of fears in people, circus life and scary clowns with a freak show twist.

What is going on deep beneath the surface of the circus tent is suspenseful drama within the performers, but more specifically with the ringleader Elsa Mars (Jessica Lange). The people who try to infultriate the freak show, Maggie Esmeralda (Emma Roberts) and Dandy Mott (Finn Wittrock), give the show an extra twist that make it worth watching. I have to say so far Dandy is my fave character. If you feel like having a good scare and like fun creepy drama a good amount of bitchiness mixed in, then this show will be perfect for you.

The Paradise: Season 2 (PBS: Masterpiece Theater)
The Paradise is strictly a show for people out there who like TV shows or movies with an air of romanticism to them. If you have Eric’s taste or you are anything like him or Brian or Mikey, then you will totally hate this show. I also highly recommend this for people who like period dramas. If you are a fan of Downton Abbey, an obsessed one like me, then you need something to get you through the next few months until it airs and this show works perfectly for that task. If you haven’t seen season 1 you can catch it on Netflix. The show is about a grand and beautiful department store in London, the shop’s owner Mr. Morey (Emun Elliott), who is extravagant and charming, shop girl Denise (Joanna Vanderham) and all the other people who work at the store and their rich clientele. I love seeing the sumptuous garments and ornate goods that are sold and the intricacies and details of the time period. There is always drama brewing behind the scenes of the store and I love watching it unfold. If you like corsets and romance, do check this one out.

A lot of times I am on Netflix and I have no idea what to watch, so if you are like me and you are stuck, here are my recommendations for some Netflix only shows.

Peaky Blinders: Season 1 (Netflix)
If you already miss HBO’s Boardwalk Empire, which just ended this year, then give Peaky Blinders a shot. This is basically a gangster type drama with some British grit mixed into it. The show is set in Birmingham, England in 1919, in the aftermath of World War I and the Peaky Blinders gang are notorious and ruthless. The boss of the crew is Tommy Shelby (Cillian Murphy) and they are mixed up in all sorts of arms deals and what not, but Chief Inspector Chester Campbell (Sam Neill) is on the hunt to catch them. He will use whatever means he can, even if it  means using female spies to infiltrate the gang. I am loving this show thus far and I absolutely adore all the guys who are super cute in their three piece suits. Word on the street is that Tom Hardy will be in Season 2. If anything that should be reason enough to get you to start watching this show.

Happy Valley: Season 1 (Netflix)
Another show that came out of nowhere is Happy Valley. A drama that was originally on BBC, about a Yorkshire police sergeant, Catherine Cawood (Sarah Lancashire) and the crimes that go on in her sleepy, usually quiet valley. Not only does the show have a crime aspect to it, what it really is about is the strong relationships she has with her family and close friends. Catherine is a no nonsense, hard working type of woman. With the death of her daughter, she has taken on custody  of her grandson. Her sister Clare, a former drug addict (Siobhan Finneran) helps her in the raising the little boy. What is really going on here is that the father of the boy is a hardened criminal and is involved in a kidnapping scheme.

Catherine knows he is up to no good and wants to keep him away from his son, but he goes behind her back to try to spend time with him. The whole kidnapping side story was suspenseful and fun to watch and it was a a really interesting twist that kept me on the edge of my seat. I really enjoyed this show because it has a different feel to it than most cop dramas that are out there and Lancashire does a really good job. One show it does remind me of though is The Killing, which I seriously miss! If you are in the mood for a British crime drama, than give this a try.

So which fall season shows have you been obsessing over or breaking up with, do tell?!