Can you guys believe that 2014 is over?! Seems like it flew right by. A lot of my favorite shows ended or finished their season in December like Sons of Anarchy, Homeland, The Affair, so the rest of the month I felt like I was searching for new shows to watch. I did find some good stuff, please comment and let me know if you guys are into these shows. Nobody else I know watches any of these, so I am curious to hear people’s opinions. 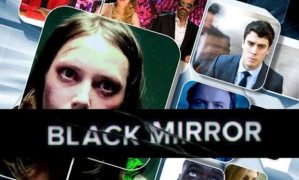 Hands down this has to be one of my favorite shows I watched all of last year. The best way to describe this show is to compare it to the Twilight Zone with a techie twist mixed with some futuristic dystopian themes. If you are a fan of that old 60’s show, then you will totally understand and “get” this one. I have recommended it to a few people already in real life and they have literally come back to me with a “WTF is this” and they either love it or hate it. Each episode is different from the last and is an original story, they are reminiscent of the way that the film Her makes a statement about society today and our obsession with our smartphones.

For example, one of my favorite episodes is from Season 1, where people have the ability with technology to recall all of their memories and with the switch of a button they can project them on TV screens. Now this could be fun to watch what happened the night before at a party, but in this one the husband wants to know if his wife cheated on him or not. Can you just imagine the kind of fights this type of device would create in society? If you find that premise intriguing, then this is the show for you. The show stars so many famous British actors like Domnhall Gleeson, Jessica Brown Findlay, Tom Cullen, Toby Kebbell and Haley Atwell to name a few. Just recently DirectTV aired their Christmas special starring my fave guy Jon Hamm. I think this is going to start gaining some traction in the US and hopefully it will become a permanent show with new episodes because seriously I am in need of more!

Fleming: The Man Who Would Be Bond (BBC/Netflix)

Ok I am going to go out on a limb and say this is another favorite for 2014. I am ecstatic that I found this mini-series and decided to watch it. This is a 4 episode mini-series starring Dominic Cooper as writer Ian Fleming, the man who wrote the Bond series and who’s tales were inspired by his own life as a secret agent. In the series, we see how the enigma and iconic character of Bond was created as Fleming was pretty much that guy in real life.

He was a playboy who was witty, smart and cunning as a fox. Recruited by the British Naval Intelligence Division during WWII, he honed in on his experiences and lived to write about them in his novels. We see his family relationships with his brother and mother and  how the character of M came to be and who she was in his life to him. Most importantly though are his loves, the beautiful  and sweet Muriel (Annabelle Wallis) and the sultry and sexy Anne O’Neill (Lara Pulver). If you are a fan of the Bond series, then I think this will definitely intrigue you or if you just like a good old fashioned spy novel, then this will be right up your alley.