I have been holding off on writing about this Walking Dead episode, because literally I have no idea what to say about it, other than it was horrible and boring. W T F what is going on with this show? I guess Brian from Hard Ticket to Home Video was right all along. If you don’t know who Brian is, he usually hates everything, but he REALLY REALLY hates this show nowadays. So much that in fact he has threatened to stop watching it, but at this point we need his commentary every week. I have invited Brian to share his thoughts moving forward, so next week look forward to hearing his TWD reactions (this could get ugly). Any who enough about Brian, let’s talk about what happened.

The show started straight off with Maggie crying. Wasn’t this the opening sequence last week too? I am so sick of seeing her cry, yet she never shed a tear or even mentioned in her sister in previous episodes, apparently now she is mourning her hardcore. Daryl is eating a worm, as food supply is in dire need. We also see Sasha following a trail looking for water, but only comes upon dead frogs. There is barely any water left and things are looking bleaker than ever. I just want to say that this is what the apocalypse should probably look like, not as it has in past episodes, where they have endless supply of food and water. It has been 3 weeks since Atlanta and they are just trying to survive and make it to Washington, D.C.

Karl gives Maggie a broken jewelry box and Father Gabriel is consistently muttering on about praying and trying to counsel her. Michonne and Sasha have a heart to heart about Tyrese’s passing and she tells her that Sasha is becoming angry. Daryl and Carol are having their own moment about Beth, Carol tells him that he has to let himself feel it. At this point this is turning into one giant therapy session. 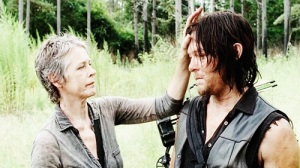 A big group of walkers comes at them and the group decides that instead of wasting energy because they are very tired at this point, to trick the walkers into falling off a cliff. Sasha at the point goes nuts and starts hacking at the walkers, putting all of her anger into killing. This spurs all the walkers to start moving faster and forces everyone to start killing them.

Maggie goes off searching and comes upon a car, she opens the trunk and finds a female zombie bound up. This in a sense angers and after shutting the trunk tries to kill her, but Glenn stops her. What was the point of this? Someone tell me. As the group rests for a moment a pack of dogs comes out of nowhere and Sasha instantly kills them and they end up cooking up the dogs for dinner.

At this point, this episode is sullen and somber it is as if they are on the verge of becoming lifeless walkers themselves. Noah tells Sasha that he doesn’t know if he will make it and Sasha says “then you won’t.” From there Daryl goes off for a cigarette and he sits down and starts sobbing for Beth. I think we need to take away his cool, rugged manly man card. But hey everyone cries even Daryl.

Out on the road someone has left a pile of water bottles and gallons. Rick tells them not to drink it, but gosh at this point that water had to look mighty tasty to them. On top is a note that says for my friends or something like that, but it sounds like a trap. Then it suddenly starts raining, everyone starts laying down and opening their mouths to get water. They run off and find a barn for shelter, finally they get some well deserved rest (this is getting dumb).

Inside the barn they huddle up and Rick gives the group a whole story about WWII and how they are all survivors. He tells them “Whatever we find in D.C., it’s okay, because this is how we survive. We tell ourselves that we are the walking dead.” So that’s what the name means… ahhhh! Daryl quickly snaps back and refutes him by saying that they are those people.

When Daryl looks outside through the door he sees a huge gang of walkers coming at them. Everyone starts pushing on the door to make sure they don’t get in and then it cuts to the morning and they are all safe. That was dumb! Maggie has a heartfelt convo with Daryl about her sister and all that stuff, yadda yadda, yadda.

Sasha and Maggie go outside and see the wreckage of the storm. Many walkers have been impaled by trees and everything looks a big ol’ mess. Then the music box suddenly turns on when Maggie opens it…umm creepy.

Once everyone walks out and prepares for the day, a clean-shaven, well dressed man walks out of the woods and tells them hi and his name. His name is Aaron and he knows Ricks’ name and essentially knows who they are. Who the hell is he? All I can assume is that he is bad news, but at least we are getting a new storyline. Hopefully this one turns out to be more exciting, than watching them walk around and sulk about life.

What did you guys think of this episode? Did you enjoy it? Who do you think Aaron is and what does he want from them? My opinion is below.