This week’s episode of The Walking Dead was actually pretty good. I know this is super late, I haven’t been at my desk or had time to write all week. I hate these kinds of weeks!!!! So things are heating up in Alexandria and it seems that they are on the verge of something crazy happening. Rick was busy scheming and it sounds like he is ready to pounce on Jessie and scoop her up. Carol is also ready to do some damage and it is obvious all of them are getting pretty bored there. Did you guys notice that Maggie has barely had scenes or lines so far? I wonder what is up with that? Maybe she is going to be killed off soon. My recap is a little different this time. I have interjected myself into Brad and Brian’s convo/rant about the show.

Let’s talk about the episode and discuss the details. 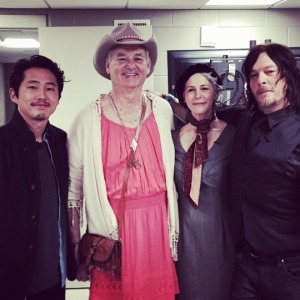 Brad: This week’s Walking Dead actually had things happen in it! It basically boils down to how much the townspeople are cowards and pussies when a crisis occurs and how badass Rick’s group is. Plus there was a great Zombie ambush scene where 3 people bit the dust—including Tara and Noah.

Melissa: YESSSSSSSSSSSS. BUH BYE. See ya later, I was so over those people that I didn’t care when they died.

Brian: The level at which I don’t give a fuck is astonishing. Because to clear out that town, build the giant wall, keep the infrastructure going, etc., they had to be useless pussies. Makes a ton of sense. And of course, Tara and Noah were semi-likable, so better kill them off. And a horde of zombies suddenly appeared out of nowhere to create drama? You don’t say.

Brad: The ambush was at some sort of warehouse they went to raid for electronic supplies. It obviously was overrun by zombies because it was most convenient to the plot. And to me Tara as Noah were the most expendable. I couldn’t stand either of them.

Melissa: Can someone explain why these people wanted electronics? And why Eugene the biggest loser of them all supposedly knew how to work these devices?

And now there’s a new sub plot of The hot chick’s husband being an alky and abusing his son. Rick to the rescue!!

Melissa: As T9M said, I just want them to screw and get it over with!

(Since Rick got laid)

And now Father Carver is warning the leader lady that Rick’s group is dangerous and will destroy the town. Why? I’m not sure.

Brian: Have they ever gone on a run for something and not encountered a horde of zombies?

I didn’t find Noah and Tara as insufferable as the rest of the group, but they were newer, so given time I’m sure they would have been.

Melissa: I think we barely noticed Tara who literally had like maybe one line a week. I could care less about her.

Yeah I think that was telegraphed from the moment they got there. It’s ok, though, because abusive husband is a storyline they’re never explored before.

It doesn’t matter, Carver will die within the next two episodes and never be mentioned again, just like Noah and Tara.

Melissa: Father Gabriel is the worst character. I absolutely think he is the most annoying. I like that actor (shout out to The Wire), but that guy is seriously obnoxious. Someone kill him.

Brad: If they did go on a run and DIDN’T encounter any zombies, then they also were out of luck on what they needed or the run came up empty probably.

Noah was a huge pussy, especially when he was living at that hospital with Beth. And Tara did absolutely nothing of note (that I can recall) in the 2.5 seasons she’s been here. So fuck ’em both!

Melissa: I have to say though I didn’t mind Noah. I kind of liked him, I would have liked to have seen him get stronger and more confident, like Carol did. BUT I guess not!

Wasn’t Carol’s husband in the first season abusive? Or was that another chick’s husband? I barely remember season 1 at all.

Melissa: I just remember Shane. They should bring him back. TWD needs more people like him.

Maggie overheard Carver telling the leader lady his fears and opinions on the group, so I’m sure someone will straighten him out soon enough. 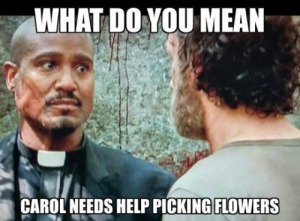 Melissa: WHO? Maggie is still on the show? I forgot she was even there.

I’m not saying I was weren’t as absolutely unwatchable as everyone else, which is the highest praise.

Yes, Carol’s husband was abusive. That was sarcasm.

Really? She overheard him? Could that show possibly be any more lame?

Also, remember when Morgan was like on the trail of the group at the beginning of this season? That really went somewhere.

Melissa: I have been wondering the same thing. What was the point of showing us that, episodes ago and never touching on it again. Not even for a brief moment have they brought him up.

Brad: I thought you were being sarcastic but I wasn’t 100% sure. And of course it’s Carol who suspects the husband is abusing the kid after the kid drops some subtle hints.

Brian: Carol who shot a young girl in the head before? 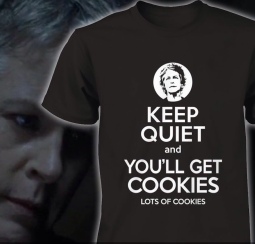 Morgan, the gentleman of color who was with Rick in the first episode, then they ran into him again a couple seasons later and he was crazy, then he showed up twice in credits stingers earlier in the season, and now will either A) never show up again or B) have followed the group from Atlanta to DC, which is impossible.

Melissa: Overall a decent episode. I enjoy when crazy stuff happens on this show and when people get attacked. That’s a mean thing to say, but come on it is The Walking Dead, that kind of stuff has to happen, otherwise the show is just boring and literally blah. Although we bitch and complain about the show, I think all of us will keep watching.

Did you guys like this episode? Are you ready for the end?