Friends, TWD fans, we have finally come to an end with Season 5. This past season has taken us through many twists and turns. Some episodes were filled with blood and guts and some were filled with grief and sadness. We lost many of our good people this season too. I also realized this season that I think I like Rick more than Daryl now. Daryl is good, but Rick has become more complex and is no longer the good guy we always believed in.

As much as many of us rant and get annoyed with some of the episodes, I can admit that I still love this show. Regardless of what I am doing on Sundays, I will make time to watch this and that says something about it. Even if we watch it to pick it apart and make fun, it is still fun and better than many shows out there. I don’t there is something about this show that still reels me in like this one. What do you guys like the most about this series? Or have you completely given up on it?

Join Brian, Brad and I as we discuss what happened in the finale.

And I was wrong! Rick is now in charge of the town! The drunk husband sorta accidentally killed the town mayor lady’s husband and immediately she gives the OK to Rick to use his pistol to kill him. So, oh well to having him become the villain like I predicted.

Glen gets shot in the shoulder by one of the townsfolk who ultimately got Noah killed and not only gets the upper hand on the assailant but fights off a horde of zombies attacking him while he’s on the ground! Apparently Glen is a superhero. 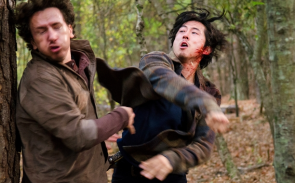 And I really don’t understand what’s going on with Father Carver at all. He’s somewhat suicidal but not really. And he’s also a villain since he left the main gate open for zombies to stroll through. Man, you think Rick’s group is stupid—the townsfolk are even dumber. The gate guard tells Father Carver and trusts him to lock the gate! And this guy is an armed guard whose sole job is to make sure the only gate in the town is secure.

MELISSA: I just want to know since when did Morgan learn how to become a ninja? Like seriously how? And yeah glad that drunk dude finally got killed.

BRIAN: So he tracked them from Atlanta to Virginia???? So in a year or so he went from normal dad to completely losing his mind to John Rambo. LASER SHARP writing.

So now they have no doctor? Good call making Rick the leader of the town. He seems stable.

A horde of zombies attacks??? Let me catch my shocked breath.

Even though I don’t watch the show anymore, Father Carver is now my favorite character, just because he tried to kill everyone.

MELISSA: NO NO!! Father Gabe is the most annoying character ever. Even more than Andrea!

BRAD: He still had that map that Rick left for him so maybe that helped him out finding them although wasn’t that just to Terminus? He actually found Daryl and the gay guy who was stuck in a car in an elaborate trap set for them by some rogue group of survivors. They brought him back to Alexandria.

So the town is having a “forum” to see if Rick should stay in the town and after all of his “family” defend him, in he strolls late with a dead zombie over his shoulder and blood all over his face after he kills a few zombies that strolled in when Carver left the gate open. Great entrance to prove you’re not a psychopath. He should’ve made a necklace made of Zombie fingers while he was at it.

Like I said, Carver makes no sense in this episode. He wanders out to the woods for no real reason. Moments later he seems suicidal when he confronts a zombie and basically just stands there waiting for the walker to kill him but stops it last minute. Then he weeps like a baby on the ground. When he returns he looks pissed and anguished but the guard doesn’t notice and lets him lock up the main gate like an idiot. Then Carver confronts Sasha in the church and she nearly blows his head off while he whines some more. I really don’t know where they are going with this character.

He obviously needs to be punished or exiled for sabotaging Rick’s group and for endangering the town on purpose but they’re leaving that for next season. He’ll most likely leave and join that rogue group of survivors who all have a “W” on their foreheads which was somewhat explained that an old Native American tribe believed men were transformed from wolves in order to survive. So the W stands for Wolf.

I thought it was for WaWa.

MELISSA: We knew Morgan had to show up eventually and yeah I had not thought of that, how did he find them? Apparently Morgan is a genius, maybe they should make him the leader. But I did like the moment when Morgan finally sees Rick and of course Rick is shooting the surgeon when he enters. But I actually liked seeing Rick blowing that doctor’s head off, he definitely deserved it.

BRIAN: But that map was just to DC, not to Alexandria, which is close to DC but still some miles away. The Alexandria group didn’t leave out signs announcing their location, did they? I guess Morgan finding them was just an incredible coincidence, which is very rare for that show. Although, why does he need to see Rick so badly?

Like how Daryl made the zombie ear necklace for no real reason in season 2?

I think the W stands for Who gives a shit.

MELISSA: Rick and Morgan were the first guys on the show, so I think they have a weird connection. Plus they have changed tremendously from the way they were in the first season, they have become sharp shooters and ninjas. Umm yeah. 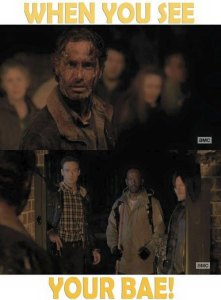 BRAD: Right. That map was just to Dc or somewhere near there but who knows how far Daryl and Aaron went out of Alexandria that Morgan found them. They were in some abandoned canning company where the boogie traps were several canning delivery trucks filled with zombies that rushed out and attacked them when they opened the door. Daryl did have one of the best kills on the show though even though it’s highly unlikely it would work. He slices the heads off of three zombies at once by swinging a chain. It looked cool but if the necks of zombies are that brittle to be sliced off with a steel chain than how are they holding their weight with their legs?!

Another thing that bothers me with this show is no one ever thinks about one of the fundamental tips to defend yourself: Get to higher ground! When we see Morgan in the beginning of the episode he’s sleeping in a car. I’d be in a fucking tree because zombies cannot climb anything! When Daryl and Aaron are ambushed by 100s of zombies from the trucks they run under the trucks instead of trying to get up on top of the trucks! And then they take refuge in a small sedan while dozens of zombies are surrounding them. Great move survivors!

That was when Daryl was a bad-ass. Or maybe he was just a huge fan of Universal Soldier.

MELISSA: The chain whip was really cool, they should carry chains with them more often. Overall I really liked this episode and of course it gets good right when it ends.

What occurred in this episode should have happened at the halfway point and I think it would have made the season more interesting. Instead of wasting time on watching them mope or be super fake and happy. I wish they would do more flashbacks, maybe that would help us understand who these new characters really are like Deanna and Jessie. Regardless, I liked the finale and now we must wait till October for it to come back. What did you guys think of the episode?