Throughout Seasons 1-4, we have come to understand the different countries in Westeros and the characters who reside in them. In the opening montage of the show, it is obvious how different and far apart the countries actually are and why it takes long voyages to get from one side to the other. Now the characters are finally merging and coming together. We have seen Arya travel around King’s Landing, the Vale and now she is in Braavos, one of the most powerful free cities. Tyrion has gone from seeing Castle Black, Casterly Rock, his home of King’s Landing and now he is off to heard towards Meereen, a city that was once dominated by masters, is now being wrecked due to their anger at Daenerys Targaryen. My point in mentioning this is that this is only the beginning of our beloved characters merging worlds and I have to say it is pretty exciting.

As much as I am disappointed at all the deviations from the book, I am still fascinated with this show and excited what to see will happen next. Alright, let’s get started on talking about the episode. 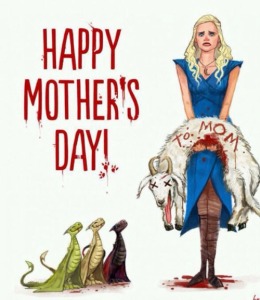 We start off right where we left off, with Jorah taking Tyrion hostage. Tyrion comes to his senses and remembers Jorah as the man who was sent by Robert Barantheon to spy on Dany. Jorah doesn’t give a crap about Tyrion and just wants to take him to Dany in hopes that she will forgive him and realizez that he is on her side. What will Tyrion think when he finally sees her in the flesh and perhaps even one of her dragons?

Out in King’s Landing the faith militant our on a roll. Lancel and his peeps take to carving the 7 pointed star onto their foreheads as I sign of their commitment to the sparrows. For Lancel this means he is officially now part of the Faith Militant. Now Lancel, the once meek little toy for Cersei to manipulate has become a bad ass. He is a little crazy, but in a way Cersei made him this way because she forced him to do so many malicious things and now he wants to wash himself of all the sins he committed. Ok, you guys need to understand that these sparrow dudes are crazy. Cersei asks the High Sparrow to seize Loras for all his sexual acts with men. The High Sparrow responds by saying that they will all be judged justly. Umm this is scary, they can basically take anyone prisoner and lock them in a cell if they think they are doing something wrong. 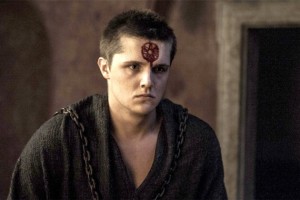 Ser Loras is caught and taken to Baelor’s Sept to be judged. This upsets Margeary like no other, I mean hello that is her brother. She asks Tommen to make this right and release of him from the cells. When Tommen goes to command they release him and no one takes him seriously. 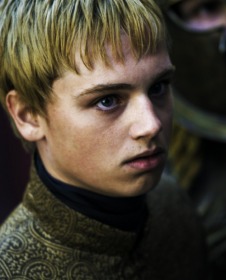 At Castle Black, Jon is now being seduced by Melisandre. She basically told him she didn’t care about hurting Stannis’ feelings because he would never know if they have sex. Melisandre speaks of the power of King’s blood all the time and she hints or maybe she knows something about Jon that he has some royal blood in him. Hmmmm, I have my theories, but I don’t know if I want to say it yet. Jon refuses her due to the fact that he is still in love with Ygritte, despite the fact that she is dead. Melisandre repeats the infamous line to him as well, “You know nothing Jon Snow.” 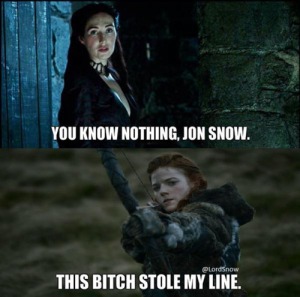 In Winterfell, the Sansa story is slowly folding out. Down in the crypts visiting her families graves, Littlefinger comes down there to talk with her. They talk about the past and about her aunt Lyanna Stark. I don’t know about you guys, but I love when they describe the past. So much that I hope that one day Game of Thrones makes a prequel to the story, kind of like Star Wars.

He tells her the infamous story of the tourney at Harrenhall, when Prince Rhaegar crowned Princess Lyanna the Queen of Love and Beauty (this was a BIG BIG deal), instead of his own wife Elia. Rhaegar was supposedly a powerful and beautiful man with silver hair and lavender eyes. He took Lyanna away and it is rumored he raped her. Of course Robert Barantheon was upset, she was betrothed to him and he was forever angry at the Targaryen’s for what they did to Lyanna, his true love. If you guys remember, in Season 1, Cersei always despised and resented Lyanna because Robert always talked about her and didn’t revere her that way. 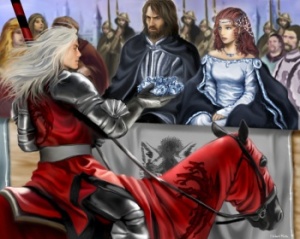 Jamie and Bronn set out to go to Dorne and kidnap Myrecella from the Water Gardnes. He wants to do this  undercover because he does not want to start a war with Dorne. On their voyage their Jamie sees he just wants to bring his “niece” back to safety and Bronn chuckles at hearing him call her that. It is obvious at this point that everyone knows that Jamie is really the father of Cersei’s children. Upon arrival at Dorne they kill some dudes on horses and start trekking towards the city.

In Dorne, Ellaria is plotting with the Sand Snakes aka Oberyn’s daughters, about avenging their father’s death by attacking the Lannisters. They also find out that Jamie is in Dorne, which only further pisses them off. They want to get kidnap Myrcella before Jamie gets to her. All these gals are really, really mad about what happened to Oberyn, so much that they are willing to start a war. Oberyn was one of my favorite characters, so I am excited to finally see his daughters. Just think their father was Oberyn and he taught them at even though they are women, they can still fight like men, so he taught them all the skills he knew in fighting. 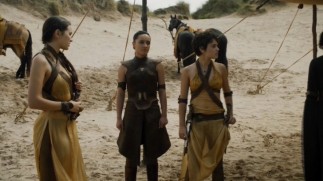 Finally we end with Meereen, again Hizdahr zo Loraq pleads with Dany to reopen the fighting pits. These pits are really important to the people of Meereen because it is a great source of entertainment to the masters and the slaves actually like to participate in them because they can show off their fighting prowess’s and become heroes amongst the other slaves.  But again Dany denies him and refuses to open the pits.

As the title name of the episode, the Sons of the Harpy are still running rampant killing people and causing destruction in the city. They ambush the Unsullied and start killing off the men. Ser Barristan also gets involved and helps out with fighting off the Sons of the Harpy. Unfortunately, while helping out Grey Worm he gets stabbed and then Grey Worm gets injured as well. Are these two dead? These two characters are pretty big and important, so I really don’t think they will die. Thanks a lot HBO for making us believe they are dead. Well who knows, I guess they could be dead too. 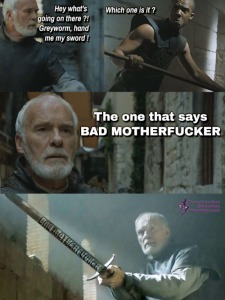 What do you guys think of this season so far, has it lived up to your expectations?

5 thoughts on “Game of Thrones Recap: Season 5, Episode 4: Sons of the Harpy”