Fifty Shades of Grey (2015)
Directed by Sam Taylor-Johnson
Written by Kelly Marcel
Adapted from the book by E.L. James

The hype was palpable over the film 50 Shades of Grey. Everyone was clamoring over the steamy sex scenes, feminists were pissed off that it featured women being violated, and everyone was having a moment letting everyone know their opinion on the film. I had to see it for myself, for movie research of course (cough cough). I will easily give you my opinion in a few words, it’s not the worst movie, it’s not great, and I would say it is just okay.

Back when everyone was talking about the book, naturally I had to go read it and see what the fuss was all about, well I only got about 150 pages in and I put it down. I couldn’t take it, the writing was so corny, I felt like I was reading one of those old romance novels with Fabio on the cover. I thought the movie will probably better than this, and really who ever thinks that when they read a book?

50 Shades of Grey is about a girl named Anastasia Steele (Dakota Johnson), a normal college girl who is a bit frumpy and modest, and her relationship with the young billionaire Christian Grey (Jamie Dornan), an enigmatic handsome guy and the most eligible bachelor around. In place of her roommate who is sick, she goes to interview Grey instead and upon arriving it is obvious that the two are completely different people. Where as he commands the room, she is meek and shy, his bravado is undeniable and hers is a bit softer hiding under layers of innocence.

From there he becomes enamored with her, perhaps for her vulnerability, but his grasp on her becomes tight. He can’t stop thinking about her and wants to be with her. He appears at her work, a supply store, out of the blue, and asks her to help him find rope, ties and masking tape. If that doesn’t sound like a list for a serial killer, I don’t know what does. After inviting her over for dinner, he immediately knows he wants her to be his. Yes, his as in a possession, as in laying a claim over her.

He showers her with affection, takes on her a helicopter ride and of course has to help her with the seat belt. As he puts his hands around her waist area, the sexual tension can be felt. When he takes her back home, he lays down a contract and asks her to be his. In exchange, she will get her own room to stay in on the weekends, where she is free to decorate as she pleases, and anything she needs he will buy it for her, a new car, a computer, whatever it is. If she chooses to be his, she must adhere to his strict guidelines in being his partner, and not just any partner; she must essentially be his sex slave. Anything he wants to do, as far off as it sounds, whips, chains, being restrained with cuffs or rope, essentially anything goes if she is willing to play in his sex room. She can amend the contracts with what she does not want to do, but everything else is pretty much fair game if she agrees.

When he shows her his play room she innocently asks if it contains an Xbox (which was really corny) and inside he shows his red room of sex. He has tables, chairs, whips on the wall of every style, flogging sticks and any sexual device that could be used for bondage. She is as much confused as she is in awe of her discovery of Christian’s deep and darkest secret.  In a way, I believe she feels special at the fact that he has shown her so much of himself, considering what a private person he seems to be to the public.

From there, the whole movie is her discovery of not only her sexuality and what it means to be pleasured in every way possible and her realization of who Christian Grey is as a person. He was orphaned and taken in by a wealthy family and that is as much as she really knows about him and he refuses to let her into his true world. Part of his rules, is that they cannot sleep together in the same bed or really do anything that would scream of a relationship, like normal dates and hugging. He is an odd person, but as he says throughout the film that is who he is and he cannot help it. Anastasia must take him as he is, if she wants to be in his life. 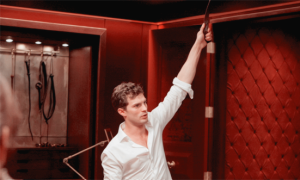 The film was fun to watch, the corniness of it made me laugh. When I saw this in the theater months ago the audience was going a bit wild during much of the sex scenes. Mostly guys screaming silly stuff, it is obvious that sex still makes adults laugh as if they were in sex-ed class learning about this topic for the first time.

Johnson was pretty brave to put herself out there and be completely nude throughout much of the film, considering this was her big break out role. She delivered a performance that was heartfelt and endearing, and I became a fan of hers by the end of the movie.

On the other hand, despite Dornan’s handsome looks and body, his acting felt very one note and dull. In the book, Grey is a force to be reckoned with from the boardroom to the bedroom and in the film, he was very blah and not that fun to watch. When the camera pans to him, he gives a gorgeous playful smile and he is great to look at, but everything else fell flat. I had only seen him in Marie Antoinette before, so I am not sure of his acting prowess as much, but I hope that he can deliver in the upcoming sequels. Since I knew that Charlie Hunnam was supposed to be in this role, but dropped out, all I could think about was how great he would have been in this film. Although I think he made a wise decision not taking the role and I think this would have devalued his image a bit.

If you on the fence about seeing this movie, I think you should see it on one of those nights where you are really bored and have nothing else to watch, or if you are just curious to see it.