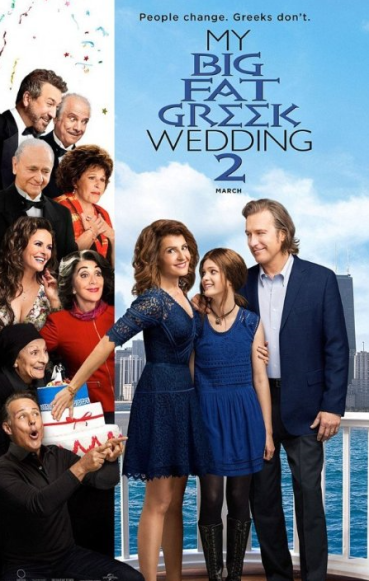 In the film, My Big Fat Greek Wedding 2, we are once again brought into the realm of the over-bearing, meddling, and somewhat smothering Portokalos family. Regardless of all their intrusions into the business of every single family member, they remain a close-knit and loving family. The original was made 14 years ago, that’s eons in Hollywood years between sequels, and gave the film a good enough timeframe from which to build a story. The patriarch of the family Gus (Michael Constantine), would love this antidote because the word eon is derived from the Greek word “age,” and can mean many years, even billions of years that can’t be measured. In the film, he continually reminds his grandchildren that almost every single word in the English language is derived from a Greek word. Once again we are thrown into their world, Toula (Nia Vardalos) and Ian (John Corbett) are now married with a teenage daughter Paris (Elena Kampouris), ready to head off to college and her family remains much unchanged.

As mentioned before, Gus still enjoys reminding everyone that the Greeks are the best, their language is the most exemplary, and he continues to use Windex for pretty much every use in the book. He even tells Paris, just as he did Toula, that she needs to find a nice Greek boyfriend and get married soon.

Toula works at the family restaurant, The Dancing Zorba, yes it’s still up and running, but this time around she devotes a lot of time to her parents who are aging and need her help even more than before. Ian is the principal of Paris’ high-school, to her dismay, and he is now completely assimilated into Toula’s Greek way of life. In other words, he totally gets how they are and doesn’t take offense to their intruding ways. When Ian and Toula go on a date to spice up their dull marriage, they make out in their car for old time’s sake and without a hitch her family shines a flashlight into the car and tries to see what they’re doing, but Ian doesn’t even blink an eye. It’s just another day with the Portokalos family to him.

The film centers much on two story lines, one is Paris wrestling with the decisions about what college to attend. Should she stay local in Chicago or go away to her dream school? She also is dealing with her Greek family and their way of being just like Toula had to contend with in the first installment. Secondly, Gus finds his old marriage license and realizes that it was never signed off by the Priest who married them in Greece. This unsigned document means that he is not legally married to Maria (Lainie Kazan) and when he ends up telling the whole family they flip out. Maria is infuriated and wants Gus to purpose to her all over again and decides she also wants to get remarried and have the wedding of her dreams. The story that ensues from here is the family trying to pull a wedding together on a shoe string budget and the craziness that comes with planning a wedding.

I thought the film was enjoyable and something that can be seen with the entire family. There is no denying that the jokes are a bit corny and somewhat overused. How many times can we see the old Greek grandmother do something funny or kooky? But still some of the humor is quite funny and really most of it came from Gus. I thought he was the best character in the whole film and he carried it from beginning to end. At times I laughed with him and others he made my heart ache a bit, which I think Constantine acted to perfection.

I also enjoyed Kampouris who played the teenage angst card well, yet she remained quite loveable. I was rooting for her throughout the film and I loved that they made her into a strong female character and not a boy-crazy teenager. She continuously reminded herself that she was a strong Greek girl who comes from a long line of resilient Greek women and to act accordingly, never compromising her beliefs or self.

The film I wouldn’t say is the best I have ever seen, nor is it the worse, but I think it would appeal to anyone who enjoyed the first one. This is a great movie for a family night out or a fun date night flick. And if you like Windex as much as Gus does, then you will really like this movie.